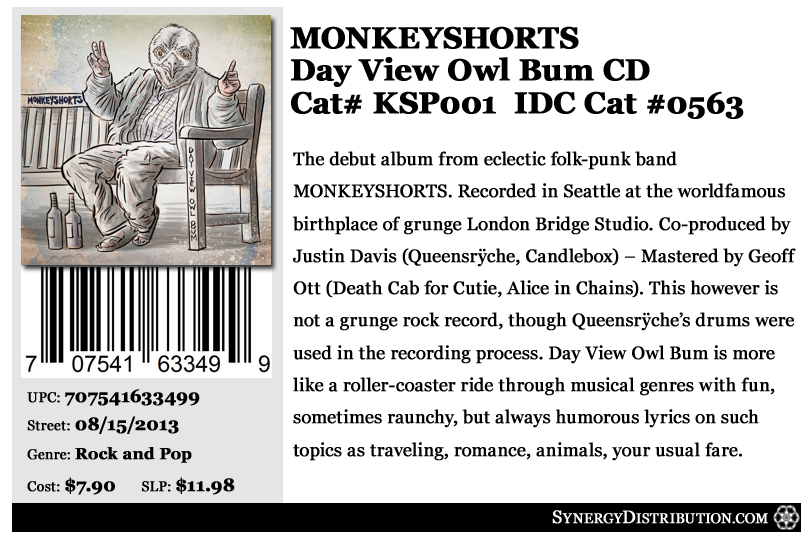 Click image above for preview tracks and onesheet of this release

The debut album from eclectic folk-punk band MONKEYSHORTS. Recorded in Seattle at the world-famous birthplace of grunge London Bridge Studio. Co-produced by Justin Davis (Queensrÿche, Candlebox) – Mastered by Geoff Ott (Death Cab for Cutie, Alice in Chains). This however is not a grunge rock record, though Queensrÿche’s drums were used in the recording process. Day View Owl Bum is more like a roller-coaster ride through musical genres with fun, sometimes raunchy, but always humorous lyrics on such topics as traveling, romance, animals, your usual fare.

Day View Owl Bum features a bluegrassy cover of Nine Inch Nails “Closer” complete with tin whistle solo. The biggest crowd-pleaser on the record is the punk-pop ditty “Platypus” owning to the fact that there’s an odd and somewhat dangerous beast lurking inside all of us. Day View Owl Bum starts out with “Tickle My Toes” featuring Tamara Power-Drutis (Phinney Estate). This song makes people laugh, cry, cum. True story. We even had to leave the room to give her some privacy. Must be the strings. Other favorites are “How’s Your Day?”, “Dinky”, “Biggest Fan” and the rest of the album. One fan called MONKEYSHORTS “the [adult swim] of music.” You will most certainly agree.

“The lowly and underappreciated platypus is excellent subject matter for a song.” ~ Dave Dederer (guitarist, The Presidents of the United States of America)

“I just listened to all your songs & really liked them, especially the one about tickling.” ~ Christina Antipa (indie singer-songwriter)